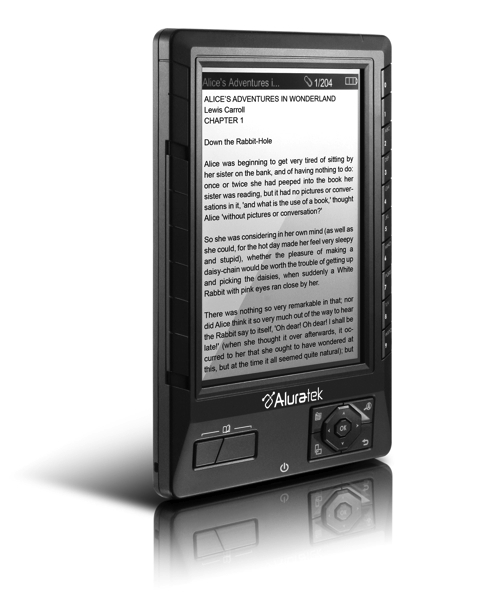 We were given an Aluratek Libre eBook reader to review, so we’ve spent the last week testing it out and getting our read on. The Libre is Borders Books alternative to the Kindle (Amazon) and the Nook (Barnes and Noble). One of the main selling points of the Libre is it’s low price point- just $99.

The Libre is about the size of a paperback book; it sports a 5″ LCD screen. The Libre’s size makes it comfortable to hold in one hand. I know some people find LCD screens to be eye straining after long periods of time (and thus less preferable to e-ink screens) but I had no so issues personally. Turning “pages” with the Libre involves either using a springy slider taking up most of the left side of the device or a button on the bottom. I found this a little counter-intuitive and it took a little getting used to since with paper books I use my right hand to the turn the page.

Battery life for the Libre is rated for 24 hours of usage, with 30 days of standby. My findings are pretty consistent with that as far as usage goes. It should be noted that the battery meter only has 3 levels so it can be tricky to get an exact reading on how much time you have left (but that’s not entirely unusual for gadgets these days). There is no backlight, so like paper books, you’ll need appropriate light to read with this.

Going through the various menus in the Libre is a bit less responsive than I’d like to see but once you have a book loaded up, turning pages is nearly instantaneous (which is the most important thing). The Libre allows you to read in landscape mode too by pressing a button and then rotating the device. It comes pre-loaded with 100 classic books like Moby Dick, Alice in Wonderland, etc.

The Libre charges via plug or USB. The USB port is hidden behind a protective rubber cover. Connecting to your computer is relatively simple once you are set up initially; just plug it in. Initial set up was a bit tricky as you need to download the Adobe/Borders software to use the Borders store to purchase eBooks. The software is included in the Libre’s internal memory, however I could not get the Mac version to work and had to manually download it from the Borders site (no problem with the PC version). Once installed (and going through an annoying register with Adobe to get a usage key step) you register with Borders if you don’t already have an account and it’s simple and quick (albeit slightly clunky- not as smooth as using something like iTunes) to purchase and download eBooks.

But you don’t have to PURCHASE eBooks because one of the BIG advantages of the Libre is that it can read virtually any open format; PDF, TXT, FB2, EPUB, MOBI, PRC, and RTF. This means you can find free eBooks on the web (and there are literally 100000s of them) and read them with this device. Free. Just drag and drop from your computer to the Libre’s memory. Google added a million free EPUB books just last year.

As far as memory goes, the Libre does come with an internal memory (loaded with those 100 free classic books) but it does also leave enough space to add a few of your own. It also conveniently accepts SD cards up to 32GB (not included but they are very cheap) allowing it significantly larger storage capacity. It also supports MP3 playback and photo support.

The Borders Libre is a decent choice for an eBook reader. There’s really nothing wrong with it other than it simply doesn’t do as much as it’s competitors (no e-ink screen, no wifi or 3g for remote book downloading, etc). Notably it is priced lower. It’s main appeal will be those with ties to or a preference for the Borders bookstore and people looking for a device to read EPUBs or other free eBook formats. The EPUB support is what gives it a huge advantage over the Kindle (which is admittedly superior and more advanced in many other ways) with access to massive numbers of free ebooks that the Kindle simply can’t play.