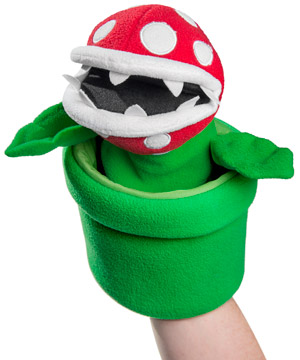 Is there no greater story than that of a tiny plumber galavanting through the Mushroom Kingdom, leaping through pipes, avoiding turtles, collecting coins, smashing his head on question mark boxes, all in a quest to save the Princess? A story as old as time, a timeless tome, a tireless tide turning tale of terror trying to tempt teens to try tie-in toys today. No there is not and even Capt. Lou Albano (remember Super Mario Bros. Super Show?) couldn’t ruin that.

Now you can regale your children in this epic story with extreme visuals- a hand puppet. Imagination is dead, kids today want live action- or better yet- film yourself with the puppet and then put it on YouTube for them to watch while you sit across the room checking Facebook on your phone. The Piranha Plant Puppet is an ambidextrous puppet (it’s even ambipedal if you’re a foot puppeteer, or just aspiring to be one, as most of us secretly are) that lets you really give Mario a run for his money. Also great for annoying your co-workers over the cubicle wall.