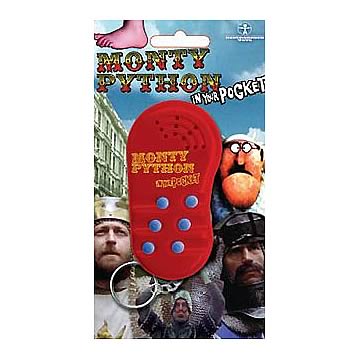 Call me a witch but I’ve never been a huge fan of the classic comedy troupe Monty Python. Ni, for those of you who are, now you can take these British funnymen with you at all times with the Monty Python In Your Pocket Talking Key Chain

“Always look on the bright side of life – whistle”
“He’s not the messiah, he’s a very naughty boy!”
“We are the knights who say Ni”
“And finally Monsieur, a wafer thin mint”
“Alright but apart from the sanitation, the medicine, education, wine, public order, irrigation, roads, the fresh water system and public health…What have the Romans ever done for us?”
“No one, is to stone anyone until I blow this whistle – do you understand – even and I want to make this absolutely clear, even if they do say Jehovah (sound of stoning)”
Secret button: “You’re f*****g nicked me old beauty”

If that’s not enough Monty Python quotes for you sketch comedy lovers out there, you can also have the inferior but still cool Monty Python Talking Coconut Keychain

. And if that doesn’t satisfy your humorous talking keychain needs for the day, you’re either a huge Monty Python fan or you simply have too many keys. I don’t think there’s a punchline scheduled, is there?

2 thoughts on “Monty Python in your Pocket”