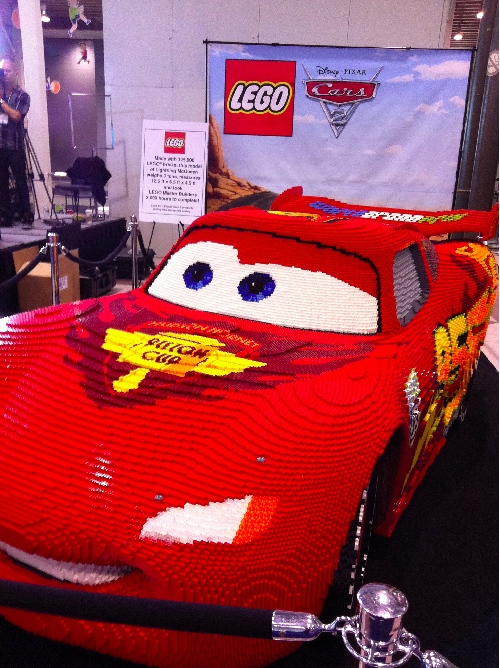 We spent all day today at the 2011 New York Toy Fair and will have lots of juicy posts with pictures and video all day Wednesday and beyond featuring the newest and coolest toys. For now we’ll just give some general impressions below while you enjoy this photo of a full size 12 foot long Lego Lightning McQueen above made from 325,000 bricks, weighing 3 tons, and taking Lego masters (best job ever btw) 2,000 hours to complete.

The show was huge with over 1000 booths ranging from a small table to massive house-sized areas and it took the whole exhausting day to see almost all of it. Many of the exhibitors were not really interested in the media but were only looking for buyers. Others (the smart ones) would talk to anyone who showed an interest while some companies had entire professional PR companies staffing their booths. Any PR is good PR, right? A lot of exhibitors were showing things we had covered before but we found some new goodies for you.

There was a surprising lack of free stuff beside candy, business cards and pamphlets, although I must give props to Astute Games for handing out a copy of their card game dabong! which sounds like something you play in college while listening to Cypress Hill but in reality is an Uno-type game with various sets of rules for more interesting play.

So stay tuned for New York Toy Fair 2011 coverage, you can use our TF11 tag to see it all.