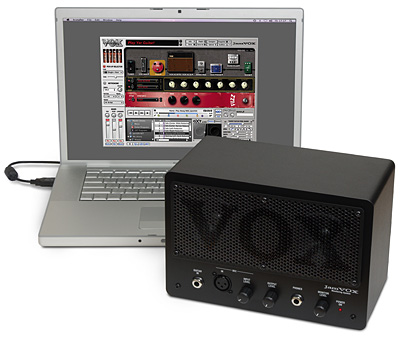 Forget those silly plastic “guitars” from the popular video games like Rock Band and Guitar Hero that just have you press a few buttons to simulate playing a guitar. This is for people who want to really learn to play like the real rock stars. The JamVOX Guitar Trainer is a USB guitar amplifier along with some very powerful software. JamVOX allows you to easily remove the guitar sections of songs and then play along using the sound of any one of 19 amps or 54 effects. The whole interface has a simple drag and drop functionality. This thing has a ton of awesome features…here’s the summary, and there’s a full (very long) features list over at ThinkGeek’s site:

The JamVOX fulfills the dream of any guitarist who has ever wanted to ‘take the lead’ and play along with his favorite guitar heroes or band. Guitarists get instant access to dozens of legendary amps and effects all in one easy to use “drag and drop” software interface. Revolutionary Guitar XTracktion (GXT) technology lets you remove the guitar part of your favorite song with the push of a button. Best of all, you can then take the lead yourself with instant rock star tone! Alternatively, you can extract or isolate the guitar part, slow down the tempo, and practice any style of music without changing the pitch.

The JamVOX gives you numerous famous guitar amps and effects that perfectly simulate the sound of your guitar heroes – all in software. The JamVOX software provides 19 types of amp model that range from classic vintage amps such as the AC30, rare boutique amps, and modern high-gain amps. These amp models use Virtual Valve Reactor technology that perfectly simulates every aspect of the original guitar amplifiers, right down to the response of the power amp circuit, differences in class A or B operation, type of vacuum tube, and negative feedback circuit. There are also 12 cabinet models to go with the amp models. Even the speakers and cabinet construction of the original units have been painstakingly modeled, perfectly replicating their distinctive spatial and tonal character.

A full complement of effect processors is also included in the JamVOX Software. From a wide assortment of distortion-type effects, standard effects such as wah and compressor, and more unusual effects such as ring modulator and acoustic simulator, there is a total of 18 pedal-type effect units. There are also 12 modulation-type effects such as chorus, flanger, tremolo, filter, and rotary; 11 delay-type effects including some that model analog circuitry such as tape echoes, multi-head delays, and BBD as well as reverse; 12 reverb effects covering all types; giving you a total of 54 different high-quality effect units including noise reduction. By dragging and dropping them, you can freely connect up to six effects in any desired order: two pedal-type effects, one modulation, one delay, one reverb, and noise reduction. Of course there are also over 100 Guitar programs that include the sounds of famous songs and guitarists and get players started with great tone right out of the box.