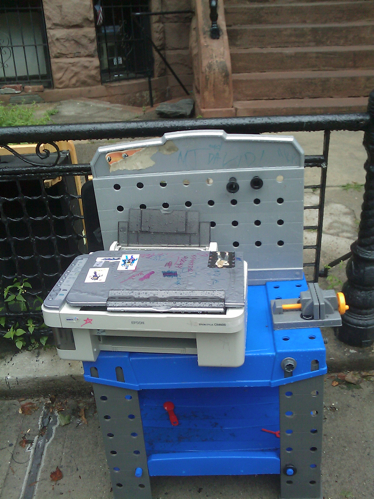 This is the first in an ongoing series about technology disposal. The alternate title of this series is “Photos of Electronic Items Discarded on the Street”. Today’s episode is the Epson Stylus CX4600 on top of what looks to be a child’s workbench. This printer appears to have been used by a child as would be indicated by the Batman and other stickers on top. There is no “it works” sign on this printer, but based upon it’s disposal location, by fence to this building and not by the curb, it is assumed that it is in fine working order. Or at least it was until it was left out in 3 straight days of rain. But would you really want it?

is a photo printer, copier, and scanner first released in 2004 that has an amazing number of 1 star bad reviews on Amazon. Out of 101 reviews it got 9 five-star, 6 four-star, 5 three-star, 17 two-star, and 64 one-star reviews. I suspect if there was an option for zero star reviews, we would see a lot of those (as this review points out in a 1 star review “NO STARS – this printer SUUUX!!!!!!!!”. And remember, a lot of those reviews were written shortly after the customers received the printer, so there was little time for it to fail. Which it apparently did in many cases, “dud”, “piece of junk”, “blank pages”, “worst thing I ever unboxed”, “Clogs all the time and uses up ink like crazy”, etc. So it’s no surprise to see this printer out on curb alert. It does appear to have been well used by this family before it was put to it’s near-final resting place on the street. Final analysis: it was time to go.