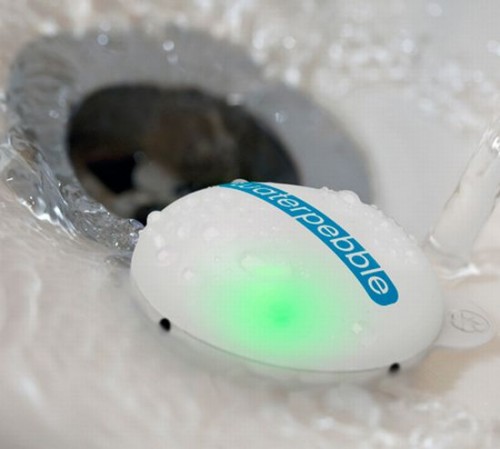 The Waterpebble is a tiny device that just might save the earth… or something like that. This small round gadget sits at the bottom of your shower on top of the drain. It monitors the amount of water that is going down the drain. Presumably you’re actually in the shower and not doing other stuff “while the shower warms up”.

An internal LED changes the color of the Waterpebble from green to yellow to red like a traffic light to tell you if you’re using too much water. You definitely don’t want to be showering for too long when it’s red- don’t make Waterpebble angry or it’ll get it’s buddy Roomba to try to sweep your legs out from under you. Maybe not, but it will make you feel just a little bit guilty about harming the earth by using up so much water for your shower.

Each time you use Waterpebble, barring a reset, it goes through it’s cycle of pretty lights a little quicker, so if you’re obedient to a tiny device sitting in your bathtub drain, you’ll use less water each time and be an eco-ranger like Moose and Zee.

The Waterpebble was designed by Paul Priestman with the lofty goal of getting people to reconsider their personal water consumption habits because some people seem to think that water just falls freely from the sky (err….). Well I’m looking at you Jason Mulgrew and your 2 hour showers- READING A BOOK IN THE SHOWER?!..buy his book (Everything Is Wrong with Me: A Memoir of an American Childhood Gone, Well, Wrong

) people, it looks funny. Just don’t read it in the shower.

2 thoughts on “Waterpebble Guilts You Into Taking Shorter Showers”