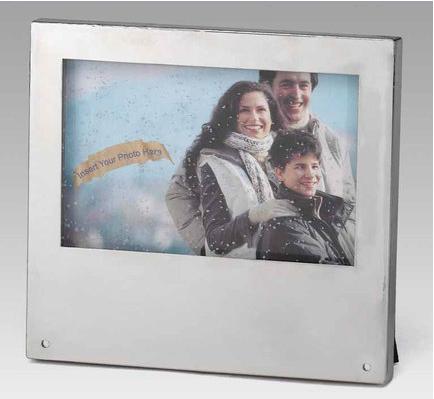 The Really Snowing Picture Frame is what snow globes would be like it if wasn’t for Christopher Columbus proving that the world wasn’t flat (history nerds step in and correct that, you know you want to). Also I would be posting this post in a Navajo dialect from my wigwam (I know, I know, technically the Lenapes lived in my area, not the point history buffs, nobody’s ever heard of the Lenapes despite their poor land bartering deals- Manhattan for $24 in trinkets? ripoff city! Shame shame shame… shame on you…Arnold Diaz FTW).

Back to the picture frame- this is a non-digital picture frame (or as we used to call them back in the day “picture frame”) and is operated by a pair of batteries. When you turn it on, it looks like it’s snowing. Snow swirls around behind the glass like a windy day at Stevie Nicks house in the 70’s. It’s really future proof since due to global warming there will no longer be snow anywhere within the next 10 years (possibly inaccurate, I’m not a meteorologist either) so you can make it snow where there is no snow. It won’t save the polar bears or anything like that though, unfortunately. It holds your standard 4″ x 6″ photos.